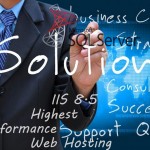 What is MS SQL?

MS SQL Server 2014 offering the full edition of SQL Server 2014 on the Windows Server 2012 R2 platform offering the best performance available. This makes for the perfect replacement for MS Access driven website’s and can be connected to from ASP.NET, Classic ASP and PHP with full support for both ODBC and OLEDB.

Microsoft also now provides Azure SQL, its database as a service solution that provides scalable resource in the cloud. This is provisioned on a typical cloud pricing model, where resource is closely metered and users are billed for each hour of resource usage.
Like all cloud technologies, care needs to be taken to control cost. While the cloud sounds appealing, an always-on application can quickly hog resources in the cloud, and this can result in much higher bills than an on-premise solution. Microsoft points out that a virtual machine with MS SQL Server installed is a perfectly valid alternative to Azure SQL, particularly if you want a fast and easy move to the cloud without the worry of per-hour billing.

Microsoft SQL Server has been in development since 1989 when it was released for the OS/2 operating system. OS/2 was developed by IBM and Microsoft in tandem at first, and Microsoft eventually took it over. Later, Microsoft purchased the SQL Server solution from Sybase and continued to develop it for its own product family, starting from Windows NT onwards.

SQL Server has been continually evolving for almost a decade. The 2005 version of SQL Server was notable for supporting eXtensible Markup Language (XML) and Common Language Runtime (CLR), allowing MS SQL Server to integrate with Microsoft’s .NET framework and greatly expanding its potential audience. The 2005 version also included SQL Server Management Studio, a graphical tool which made management much easier. Media support was added in the 2008 release, and this was critical for its use on the web.

MS SQL exists in several versions concurrently, so it is never automatically phased out when a new iteration is released. MS SQL can therefore be installed on single user computers, dedicated servers or entire data centers, since there is a version suitable for most purposes.
The Enterprise edition of SQL Server 2014 is designed to support massive organisations and can handle database sizes up to 524 petabytes (549,453,824 gigabytes), utilising 2 terabytes of server memory and up to 160 physical processors.

If you need a Windows server to host your website, you’ll probably also need support for an MS SQL database. The two go together, and key Windows technologies like ASP require both parts in order to function. While it is possible to run the open-source alternative, Here i will recommend you to choose cheap and reliable hosting 2015, ASPHostPortal.com offers the newest Microsoft SQL 2014 database with all they hosting plans. they are dependable SQL web hosting provider who will fulfill your needs!. ASPHostPortal integrate and centralize everything from the systems to the control panel software to the process of buying a domain name. That means they can innovate literally everywhere. ASPHostPortal’ve put the guys who develop the software and the admins who watch over the server right next to the 24-hour Fanatical Support team.

ASPHostPortal allow you full remote connectivity to your SQL Server 2014 Hosting database and do not restrict access in any way.

With ASPHostPortal SQL Server hosting package, there’s no need to rebuild your database from scratch should you wish to transfer an existing SQL Server database to them. If you already have a database hosted elsewhere, you can easily transfer the contents of your database using SQL Server Management Studio which is fully supported. SSMS provides you with an Import/Export wizard which you can use to upload your data and stored procedures with a couple of clicks.

They also give uptime and 30 days money back guarantees. There are so many clients prove that ASPHostPortal give fast & stable network, and best technical support. So we highly recommend you to choose cheap and reliable host your site on ASPHostPortal.com. For order and more information please visit ASPHostPortal official site at http://asphostportal.com or please contact them by email at [email protected]